7 Steps to a Successful Coaching Conversation 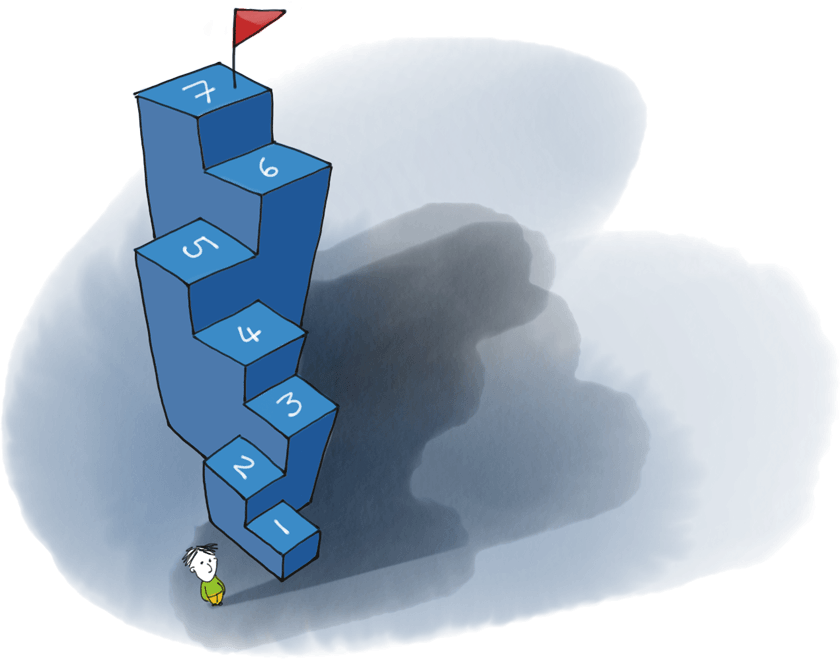 How can ‘non-directive’ coaching be both structured and rigorous? This sounds paradoxical, but the paradox is resolved by the realisation that while it is never appropriate for the coach to impose their ideas, model of the world or solutions upon the client, it is wholly appropriate for them to structure the conversation to give it a clear sense of direction.

This is what helps move the client from being stuck/problem-focussed/confused to a state of clarity about what they want and what they are going to do to get there.

The following 7 steps work with just about any coaching model though they contain some elements missing from most models (eg ‘establishing ownership’ and the ‘congruence check’).

Ask a mixture of open-ended and closed questions to gather information about what’s going on:

[It is preferable to use neutral words like ‘situation’ or ‘challenge’ rather than words like ‘problem’ or ‘issue’ which could unconsciously reinforce a state of ‘stuckness’.]

When you have gathered enough information to gain some understanding of what’s been going on, summarise back to the client what they have said, using their own words as far as possible, eg

This reflecting back/summarising is extremely valuable for the client to gain some objectivity over what’s going on, and for the coach to check out that they have correctly heard where the client’s main concern or area of interest lies.

It may be appropriate at this point to ask the client for a first statement of their goal ..’I want my second in department to pull his weight’ ‘I’d like to be more organised’ ‘I want to be less stressed’.

In my experience in as many as 50% of cases the initial goal contains elements outside the client’s control, usually to do with other people or matters over which they have no influence. It is often useful to state this directly:

The client can change how they think, what they do and what they say. They cannot change how other people think, behave or act. It is only worth hearing about other people’s behaviours to the extent that it provides useful information about the situation and how it affects the client. After that point the focus needs to make a clear shift to what the client can think, do or say.

Be prepared to repeat this stage as many times as is necessary to get the client to focus on their own circle of control.

3. Find out what the client has already tried

Summarise back to the client

This can help the client see the situation and their own behaviours more objectively, from ‘third position’ in NLP-speak. This can help them prepare internally to consider what may be new and more effective ways of behaviour.

Here are a few really useful questions you could ask to help the client explore what the solution might be like:

(Most of the time coaching questions are short and the client is talking more than the coach: occasionally though the coach will slow things down, and ask a longer question, with pauses, which gets the client into a space in which they can think new thoughts)

Once the client is clear about what the solution looks (sounds, feels) like, it is time to turn it into a ‘well-formed outcome’.

This is a course of action so compelling that the client is almost certain to carry it out.

It has the following criteria:

Clients often try to please others by stating the goal they think they should be going for! Yet it’s hard to be inspired by a second hand goal. Keep going until you get real congruence! (In NLP-speak this stage is called the ‘ecology check’).

Finally the outcome or goal is expressed really Specifically and concretely, stating the exact time, place, actions, words that will take place

Of course you will get the client to work all this out by asking the relevant questions!

It could well be helpful to ‘micro-coach’ or rehearse every last detail, eg get the client to say the words they will say, in the manner they will say them, with the coach giving feedback and checking back until the client is as clear and confident as they can be over what they are going to do and say.

Often the client’s worst fears will seem far less powerful by being spoken aloud. Occasionally though there could be some real consequences or even danger from a course of action and this needs to be explored carefully. Weighing everything up, do they still want to proceed?

Coaching that doesn’t lead to action is a waste of time and money, apart from the few cases where the ‘action’ is for the client to ‘let go’ of a situation that they have realised is not actually their issue!

If the answer isn’t a 9 or a 10 then it is worth checking out what could get in the way of successful action, and asking

Depending on the agreed protocols this could be the time for the coach and client to jot down a few notes detailing the actions agreed and the time and place of the next meeting.